Tech reinvented photography some 30 years ago with the introduction of digital cameras, but today’s tech makes those early digital cameras seem like the film camera version of the Kodak Brownie.

Caltech recently invented a digital camera that can shoot at a rate of 70-trillion frames per second—a speed fast enough to allow the camera to capture light waves in movement.

The world’s largest digital camera, which records at 3,200 megapixels is currently being installed in the Vera Rubin Observatory in Chile. With resolution capable of capturing a golf ball in detail from 15 miles away, the camera will be used to capture previously unrecorded details about the billions of stars and galaxies in our universe. 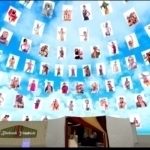 Sex Robots
Scroll to top
We use cookies on our website to give you the most relevant experience by remembering your preferences and repeat visits. By clicking “Accept”, you consent to the use of ALL the cookies.
Do not sell my personal information.
Cookie SettingsAccept
Manage consent